The Runner of Little Races by Ray Diamond 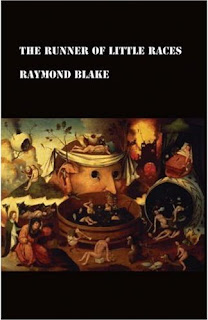 Imagine one of those Is it just me or is everything shit? books as a collection of poetry written by somebody who was genuinely unhappy, as opposed to cynically satisfying the market for mildly amusing Christmas presents for people you don’t really know.

Imagine that and you could end up with The Runner Of Little Races by Ray Diamond. There’s some strong recurring themes running through the collection: death, decay, loneliness, resentment, self-loathing and fear – fear of everything and everyone.

Diamond is a popular (or at least well-known) figure on the London poetry scene. In person, he’s known as Raymond Blake and some further confusion is provided by the use of this name on the Amazon cover image. Blake’s regular party trick is to do an extremely long, increasingly angry, open mic slot – replete with politically incorrect references and grimacing, and often prolonged by reading several poems without a break as if they’re one poem – and then engage in a darkly comic battle of wills with the promoter as they attempt to either coax or shove him off stage.

This can get a bit wearing but the book works. This may be partly because - when reading it to yourself - it’s clear where one poem ends and another begins, and you can stop reading at any time. But it’s also because - taken as a whole - Diamond’s consistently grim worldview amounts to strong combination of downbeat social commentary and self-deprecating character portrait. Some of the social commentary is prescient, some of it is utterly ridiculous but it fits the disgustedly despairing everyman persona.

‘Real Estate’ is a darkly comic poem about the general state of terror inhabited by the winners in our recently extinguished property boom:

“Where I’m living now
We’ve all clubbed together
For our own private police-force,
And executioner

Got three kids –
They’re still in the womb
Safer
Privately-educated, of course
We communicate by ultrasound –
Quality time!”

While the grimly typical ‘It’s been a good year’ is an exemplary combination of self-deprecation and deprecation of the entire universe:

“No lasting damage from the recent mugging
Psychologically speaking

The head wound’s coming along nicely

Haven’t made any friends yet
In life

But I’m on talking terms with the traffic warden

Well
I speak to her

Been a good year
On the whole
So far…”

* David Floyd is a co-editor of Brittle Star magazine.
Posted by echo from the canyon at 12:59