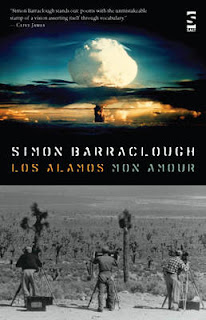 Los Alamos Mon Amour. You know from the initial title poem, a disturbingly eloquent fusing of sex and death through the imagery of a nuclear explosion that the reader is in, as Mae West might say, for a ‘bumpy ride’. Simon Barraclough is a highly skilled and somewhat discomfiting writer who can easily take his reader outside their comfort zone. His vision thwarts the obvious and banal through a mixture of shocking subject matter (nuclear war, drowning cats, peeling dried-on contact lenses, voyeurism through a fitting room door, mental instability, trapping a childhood friend in a fridge…) and shockingly good writing. The poetic line is as muscular as it is musical with a strong sense of the alliterative tradition that informs his northern roots. He also has a keen ear for a rhyme and can turn a sonnet as well as anyone. But there is something more to this collection than an out-of-kilter imagination allied to a strong formalist command of verse.

Barraclough is a highly intelligent and playful writer who is not shy of the odd allusion. Clive James has noted his 'readiness to make a knowing reference to the popular arts twice per line'. The collection is littered with references to the movies of Alfred Hitchcock, The Godfather, Jaws, Buffy The Vampire Slayer, the Queen Mother, Hannibal Lecter, Yuri Gagarin, Ted Hughes, Robert Lowell, John Berryman, Dario Argento, Desert Orchid and no doubt many more. For some this is a point of criticism, as if the poet is trying to hoodwink the poor reader through his own smart-arsed cleverness. It’s the kind of thing you still hear undergraduates railing against the likes of Joyce, Eliot and Pound and misses the point altogether. Yes Barraclough is, as Clive James put it, 'knowing' but his work is grounded in the real world of human drama and emotion and his formal craft as a poet demonstrates it is possible to be culturally allusive without being intellectually elusive. All the reader has to do 'is follow the argument and the rhetorical rhythm'.

Some readers have accused Barraclough’s work being ‘detached’. To an extent, but this does not mean it lacks emotion or feeling; ‘Fusing the Braids’, for instance, and the longer, finely paced, ‘Nato e Morto’ are both touched with a deeply-felt tenderness. What it means is that Barraclough uses poetry as a field of imaginative possibility in order to see the real situation of his emotion as in 'London Whale':

Look how sentimental you make me;
we're a city of visitors, you see.

There's a genuine empathy for with the plight of the Thames whale but Barraclough understands that his own deep-felt sensitivity is a form of nostalgic sentimentality informed by both the wider cultural symbolic value of the whale (noble intelligent creature brought to almost extinction by human greed) as well as his own state of impermanence in the world (or London). This image of the whale's place in the world of the human cultural consciousness and its physical displacement in the river Thames might stand for the position of Barraclough's own poetic vision and the sense for the reader, as one Amazon reviewer succinctly put it, 'balancing headily between two viewpoints'.

Barraclough is from Huddersfield and when he’s in ‘Northern mode’ one finds the obligatory ‘ginnels’, ‘millstone-gritty’ walls and regional accents (‘Corrie Sonnet’). These are fine moments but less successful if only because they are snickets well trod and the influence of Simon Armitage and Hughes lie a little too heavy. Besides, Barraclough is more than a mere regional voice. He is much more in place in his metropolitan surroundings: London, Rome, New York.

The poems about St Paul’s are particularly satisfying and original. The building and its surroundings morphing, for instance, between a protestant London and a catholic Rome (via Marilyn Munroe) as in ‘Wearing St Paul’s’:

I stride through town in my giant skirts,
trailing their fringes through the London dirt.
Like subway draughts in The Seven Year Itch,
the winds of modernity gust and hitch
the hoops right over my head, revealing
canon and clergy hurriedly fleeing
down to the docks to sail back to Rome
to cling to the hem of that wider, safer, dome.

Los Alamos Mon Amour is a sparkling debut and this review barely scratches the surface of this remarkable, multifaceted work. Barraclough is a laconic observer of 21st century life and his place in it – in many ways reminding me of Larkin – he is a poet of genuine skill, sensitivity, intelligence and a wicked sense of humour. There’s a filmic quality to the work and, fine lyric poet that he is, I’d love to see something longer with a more sustained narrative in the future. On this outing the future bodes well.

* Andrew Boobier's first collection Reader, help me was published last year by Graft.
Posted by echo from the canyon at 17:37