Music For Landing Planes By by Eireann Lorsung 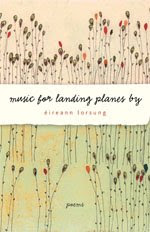 Minnesota-born Eireann Lorsung is a well-travelled young poet, having spent lengthy periods of time in Venice, rural France and Japan, all of which provide locality and inspiration for her poems (‘Every place I’ve been/is on fire with words’) while creating a contrast for what I imagine is a Midwesterner’s sturdy faith in landscape, in grounded hard-working, and clear-thinking, plain-speaking honesty.

are dying off. Between land & ocean
you stop thinking of it and it’s gone.
Sudden

lack of birds. Pitch pine. A bog quaking
to life, with life, you had better

listen to this disappearing land, you had better
be quick, keep it trimmed,
burning—

(from ‘The Way to Really Love It’)

Alongside this comes a certain type of spirituality; there is a thread of John Burnside apparent in her style and earthly devoutness: ‘I believe in the resurrection and the life of the world to come,/but I want this one.’

While full of so many exaltations, prayers and alleluias to the pleasures of the world, it should also be noted that Lorsung’s work is still entirely rooted in the everyday (though she is able to take daily moments and make them transcendent). The poem ‘Doing’, about her mother’s illness, is a moving portrait of a real relationship, brought to a close with a gravitational jolt:

I can’t pretend it’s something distant
anymore, some glamorous thing to die
like girls in movies. I know what it is:

six prescriptions. The insurance company’s warning.
My father holding my mother’s hand
where the cracks run deep and bleed of their own accord.

The scattering of lines and words across white space seems to be on the rise amongst contemporary poets, and Lorsung’s work carries this off to great effect, with nothing clumsy or random in how she places the words on the page – to put it plainly, it does not jar. This is seen especially in her longer poems, such as ‘In the Wide World’, a beautifully fluid list of the multiple objects and occurrences in the modern world, and ‘How My Name Came to America’, a fractured, documentary reckoning with the poet’s ancestors. I love Lorsung’s style in these poems, her faith (again) in where to let lines find their own length, how to let thoughts linger.

Lorsung is an accomplished printmaker, a dressmaker, a photographer, a painter, a keen gardener, a lover of making things, all of which are stitched beautifully into her poems. Music For Landing Planes By is, above all, a testament to artisanship, a belief in carefully crafting not just poems, but clothing, a cake, a piece of music (worth noting, too, are the incredibly high standards of Milkweed Editions – poetry books as brilliantly produced as this are hard to come by). Part of this artisan spirit is concomitant with the staunch anti-materialism and avid care about the environment. In ‘Knitting’ she writes ‘There is forgetting in the density of raw new wool,/yarn shop one block from your apartment,//the cheap scarf—you don’t value things/because you never make them’. This collection is a celebration of making things, and so a valuing of them and the world. It is ebullient, generous, tender verse.


* Michael McKimm’s debut collection Still This Need was published by Heaventree Press in 2009.
Posted by echo from the canyon at 09:55