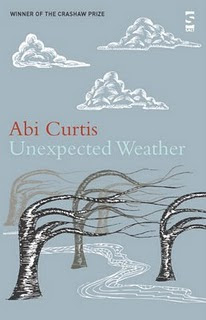 Unexpected Weather is the first full collection from Abi Curtis, an Eric Gregory Award winner and Lecturer in Creative Writing at the University of Sussex. At the heart of the work is an interest in the numinous and insubstantial quality of atmosphere and mood, most often rendered by elemental forces, predominantly air and water. This requires a deft touch. Curtis divides the book in two sections: Fata Morgana and Ignis Fatuus, both willo-the-wispy types of light-mirage seen in the sky, with the difference that the first kind is airier, and the second found closer to the ground, especially in marshy landscapes. Indeed, the few poems with an earthier quality, ‘Mole’ and ‘Mycelium’ in particular, are placed in this second half of the book.

A recurring image is that of liquids and gases, immiscible or otherwise, mixing and coalescing. In ‘Loom’ the approaching weather comes slowly, “stretching its limits like milk in a bowl of water”; in ‘Soliloquy of a Molecule’ the speaking molecule (a character that seems to discover itself through the course of the poem in a style similar to that of Ted Hughes’s Wodwo) claims: “spin us fast enough in the guise of ink: / we’ll form arabesques only we can discover”; in ‘Tantric’ the persona speaks of many kinds of embrace, and one “where the kind of love / combines milk with water”; and in ‘George Gabriel Stokes’ the eponymous scientist stands on the Giant’s Causeway observing “the turning sea” thinking of a doctor who “pushed morphine through his blood”. Indeed, this last poem, concerning itself with a man who helped to develop equations used to understand motion in gases and liquids, takes as its subject the scientific backdrop to the book’s signature image of gases and liquids in motion. A later poem, ‘Cloud’, also immerses the reader in a “boneless … haberdashery of vapours” just as the speaker, in flight, imagines the grit and sediment of the ground as its opposite.

The slow-motion unfurling of milk in water, or morphine in blood, is an ideal image with which to illustrate Curtis’s poetic style. The predominant use of free-verse pentameter lines allows for long, detailed stanzas in which Curtis builds a slow accretion of detail, making the poems unfurl with a mesmeric quality. Similarly, in another poem dealing with unexpected weather, Curtis slows the pace at the moment of describing a woman she has witnessed being struck by lightning:

“…if you watch anything through flashes
of lightning, it appears suspended
as if life were frame after frame and never moving.”

But these atmospheric effects are also a way for Curtis to examine something more bodily – the coalescing of lovers, with rain, thunder, lightning, wind and cloud all functioning as fallacies for the amorphous shiftings in relationships. The opening poem, focusing on the painting of Lady Jane Grey’s execution, kept in the National Gallery, transforms the canvas to a portal between the persona and a loved one, both of whom have imagined themselves into the scene, albeit at different times. The executioner is depicted as looking on his next client with “a kind of love”, thereby mirroring (through Shakespearean punning on the loss of maidenhead and cutting off the heads of the maids), the consummation toward which the female persona is being led by her lover at the end of the piece.

This is a striking collection, full of moody, breathy language. The emphasis on the natural world is counterbalanced by a number of scientific poems and references, but the whole thing is concerned with cloudy movement and transformation: whether that’s a ghost in a nature reserve detailing the decomposition of its former body, the Scarecrow from L Frank Baum’s The Wizard of Oz waking to find his “temples thrumming”, a cranefly being wrapped by a spider like a ham in a larder, or a werewolf failing to remember how it made it home “smoky and besotted”, Curtis clothes her mutable and airy themes in rich, earthy language.

* David Briggs' first collection The Method Men is due soon from Salt
Posted by echo from the canyon at 17:19