The Devil's Cut by Marianne Burton 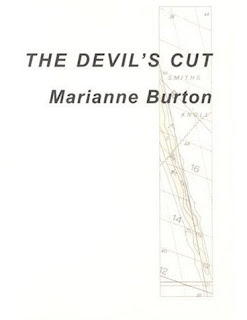 There’s a darkness lurking beneath the poems in Marianne Burton’s debut pamphlet, published as part of the Smiths Knoll Mentoring Scheme.

While some of the poems are based on specialised knowledge or unusual experiences, many are based finding the strangeness or wonder in seemingly everyday occurrences or situations.

The real grimness in ‘Identifying Mr Barr’, a poem about a dentist called to identify a suicide victim from his dental records, is not the gruesome sight of the dead body in the mortuary but the contemplation afterwards:

“He lay in the bath, watched his own skin swell,
wrinkle, and thought about Mr Barr. Thought about
the lack of a note, about heavy lunches.

Thought about the wife who couldn’t recognise
the body, not even the lower front gap.
Moved slowly through his own teeth, body, wife.”

Where Burton’s subject matter hovers between the unusual and the mundane – a fridge dumped in the street becoming ‘The Landmark’ or the witty reflections on the modernisation of local pub in ‘Making Over the Arms’ – her success is in taking the reader in one direction rather than the other.

Burton packs a phenomenal range of subject matter and ideas into 21 pages of poetry. She experiments with language in ways that are both simple and inventive. In ‘Staying at the Embassy’: “’Don’t worry,’ he said, arranging caracul on a double word,”
is followed with further Scrabble references including: “Is there serious danger?’ I ask, adding –atic to phlegm. He nods,”

This poem sees the cosy, English pleasures of a game of Scrabble and a ‘seventies dinner’, existing uneasily with the hints at what’s going on outside the embassy walls. We don’t find out where the embassy is.

Burton is both interested in things and in possession of the skills to make those things interesting to a reader who knows nothing about them. ‘Delivering the Foetal Dioramas to Peter the Great’ is a darkly hilarious take on the practical challenges faced by the 18th century Russian leader in acquiring items for his wunderkammen.

The Devil’s Cut is a very different collection of oddities to Peter the Great’s but it’s equally worth a look.

* David Floyd is a co-editor of Brittle Star magazine.
Posted by echo from the canyon at 19:31