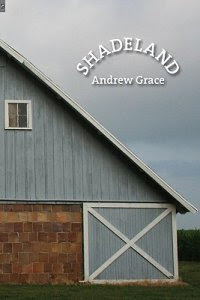 
I found a rough location for Shadeland, the farm where Andrew Grace grew up, from an online Illinois agricultural journal. The farm is just north of Urbana and east of Route 45. In fact, with Google Street View you can make out what may be the building on the book’s cover half-hidden behind trees, a buckshot spatter of tiny birds in the grey sky, spooked maybe by the Street View camera car as it drove north towards Thomasboro.

Grace sounds like an English name and reading this book I had the feeling that even though people of English ancestry may have farmed in Illinois for generations, they’re still in some way new to it, and so is their language - as though this vast, flat land of locusts and steel silos hasn’t yet and never will absorb a language born in a place like England.

This is contemporary American poetry, but its pastoral subject matter and lyricism made me think of the Midwest of James Wright but also of English Romantic writing – as if John Clare had been on an MFA program. In fact the “third way”, between the mainstream and the non-mainstream finds a home in this rural context that seems to suit it particularly well. Perhaps a farming landscape, half-tamed as it is, exists in another kind of middle ground between the familiarity of the urban and the dissociation of the wilderness.

There’s also the sense in these poems of how the Christian God of the Midwest might mesh with this world. Two of the poems in the book start with lines from Hopkins who believed that a thing’s nature, it’s “inscape” might reveal its purpose in creation, a thing’s sanctity. Grace’s observation of the natural world has a similarly rapturous quality and the sense of a religious undercurrent gives his work a rooted intensity.

The death of Andrew Grace’s father is the background to all the poems in this book, and grief seems more exposed in the appallingly wide fields. In this fabulous, disturbing and gentle book, the young man shows himself and how he is this place.

* Mark Waldron's first collection The Brand New Dark was published by Salt in 2008.
Posted by echo from the canyon at 16:31